Home › Blog › Do You Need Help Dealing with Hornets in Merrimac?

Do You Need Help Dealing with Hornets in Merrimac? 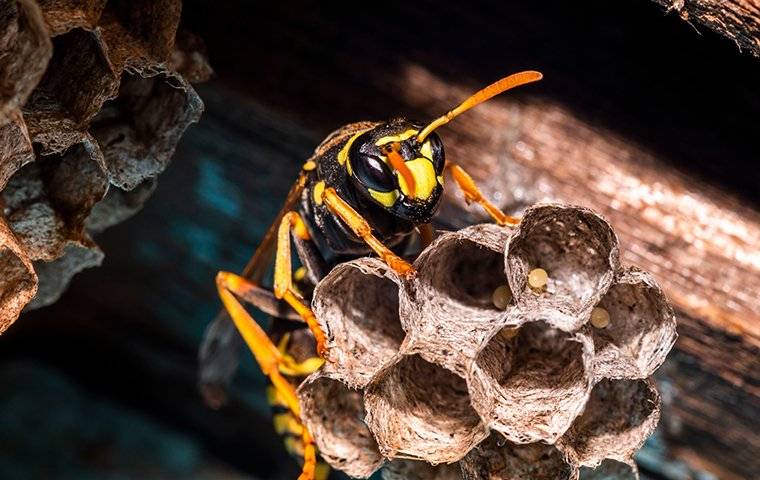 The Key to Identifying Hornets

So now that you have a full list of stinging insects in Merrimac, you may be wondering how you identify a hornet over a bee or wasp? Hornets are rather large stinging insects; they have slender bodies and are typically dark in color.

Compared to a bee, hornets are much sleeker and longer. Compared to a wasp, hornets are darker in contrast to the wasps' bright colors. Furthermore, unlike bees and wasps' hornets will eat other insects instead of only nectar.

Below is a description of two common hornet species we find here in Merrimac:

Both hornets are highly protective of their nests and possess a painful sting. They will become aggressive and swarm if threatened.

Some Helpful ways to Deter Hornets in Merrimac

There are a few ways you can deter hornets on your property. All types of stinging insects are attracted to common food sources and secure shelter. You'll want to be sure any garbage stored outside is tightly contained and disposed of promptly. Bird feeders filled with decaying seed should be washed and refilled with fresh seed. Hummingbird feeders filled with sugar water are an excellent food source for hornets too. Check liquid feeders every couple of weeks for leaks and keep them in a shaded area.

Essential oils can deter hornets and other flying insects that sting too. Essential oils such as clove, peppermint, lemongrass, and geranium may repel hornets. Mix a few drops of oil into a spray bottle with soapy water and spray the solution on any spots where there have been nests in the past or where you think might be a possible future spot. Some recommend spraying this mixture directly onto a nest, but here at Freedom Pest Control, we'd rather you leave an active nest to the stinging insect control professionals. Don't put yourself in harm's way.

How to Find the Hornet Nest on My Property

It is common to think that all types of stinging insects build their nests high up in a tree or the corner of a breezeway. However, we can use a stinging insect's nest to help identify the species. Some bees and wasps build their nests underground, but the bald-faced hornet and the European hornet build their nest above ground in hard-to-reach places. They are both described as having a nest that resembles paper and is usually grey. The European hornet tends to build its nest in slightly more guarded areas such as in the hollows of a tree or under a porch using whatever structure it is attaching to as part of its protection.

There is an impressive list of stinging insects in Merrimac. Most of these insects are aggressive and highly territorial. They seek out food sources and build their nests in places that protect the hive physically, but they will attack if they feel threatened. Although there are some DIY solutions for getting rid of these pests, Freedom Pest Control implores you to please don't try to handle a nest alone.

Our pest control professionals are on standby to protect you and your family from the stinging insects in Merrimac. If you are concerned about hornets, bees, wasps, or any other type of pest, give us a call. We will be happy to help.