Home › Blog › How To Get Rid Of Woodchucks On Your Merrimac, MA Property

How To Get Rid Of Woodchucks On Your Merrimac, MA Property

When people make preparations for pest management, they tend to focus on insects. This is understandable, considering that they can be very destructive and transmit diseases. However, animals can be just as detrimental to your Merrimac, MA home or business. People tend to forget about this threat or be unaware of it altogether. It’s often assumed that wildlife wouldn’t be anywhere near a residential or urban area. This is a huge misconception.

There are elements surrounding human dwellings that can be attractive to critters like woodchucks. With that in mind, you have to be familiar with how such animals operate. You’ll then know what hazards are involved. Most importantly, you’ll learn how you can stop invasions. If all else fails, you’ll find out how Freedom Pest Control can be of assistance. 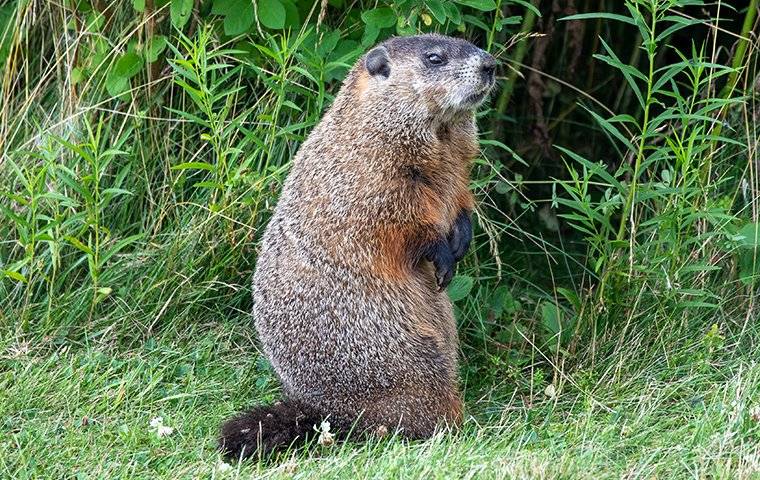 How Do Woodchucks Look And Behave? What Are the Risks?

Woodchucks are also called groundhogs. They are covered in thick fur that is a mix of gray and brown. In terms of size, they range between 16 to 22 inches long and weigh 5 to 13 pounds. Their bodies are chubby, yet compact. Among their features are short tails, four legs, and lengthy claws at their forefeet that are curved. There are six known species in the United States. Large groups of them will be in wooded areas, like forests. You’re also liable to see them running along fields and small bodies of water. If your place is near such a zone, be on alert.

When woodchucks are on properties, they’ll be in grassy spots. The reason they gravitate to organic matter is they love to dig extensive burrows to live and hibernate in. Famously, their overwintering period is monitored on Groundhog Day in February to discern if there will be six more weeks of cold weather. The idea is that if a woodchuck can see its shadow, it will go back into the burrow. Otherwise, it will leave and spring will be upon us. Tunnel systems made by these pests may be by road edges, fences, tree bases, and human dwellings. Your landscaping, domicile, or establishment could be damaged as a result of their activities. Moreover, any gardens, crops, or food you’re growing might be ravaged. Some of the things woodchucks eat are:

Since woodchucks are most active during the day, catching them out is a clear sign of infestation. Additional indicators are seeing their dirt mounds and finding sudden holes in foundations or vent covers. Though these pests rarely approach humans, they’re dangerous because they harbor rabies, ticks, and fleas. Moreover, they draw in predatory animals like bobcats, coyotes, and foxes. Sometimes, they trigger electrical shortages and fires when they chew on wires that are underground.

How Can Woodchucks Be Prevented?

Perform these tasks to ward off woodchucks and avoid their havoc:

What Can Freedom Pest Control Do About Woodchucks?

Commercial products for animals like woodchucks can be incredibly expensive. The instructions are often complicated, which can lead to improper use. Last, but not least, they can be toxic or risky to employ. Take the safer, more reliable route by reaching out to us at Freedom Pest Control. Our skilled technicians will use quality wildlife control treatments on your property. The Have-a-Heart traps we have are a humane approach to getting rid of these creatures. Call us today!