Bed bugs (Cimex lectularius) are a largely transient pest now deemed a public health concern by the Environmental Protection Agency (EPA), the Centers for Disease Control and Prevention (C.D.C.), and other agencies. Bed bugs most commonly feed on the blood of humans while they are soundly asleep. Evidence suggests that bed bugs originated in ancient Egypt and entered the U.S. aboard colonial vessels.

In the 1950s, bed bugs were nearly extinct as D.D.T., and other potent pesticides became widely used. In the 1990s, bed bugs reemerged as more people began traveling and using forms of mass transit, and these pests demonstrated greater resistance to modern pesticides.

Adult bed bugs measure up to ¼ of an inch and have a flat, oval body style that appears in shades of red or brown. Although adults have wing pads, they are incapable of flight and rely on their six legs for movement and antennae for sensory and navigational purposes. Young bed bugs or nymphs emerge from eggs and appear as yellow or white.

Are you trying to determine what to use to kill bed bugs? A Portsmouth pest control professional knows how to check if you have bed bugs and how to exterminate bed bugs safely and quickly. 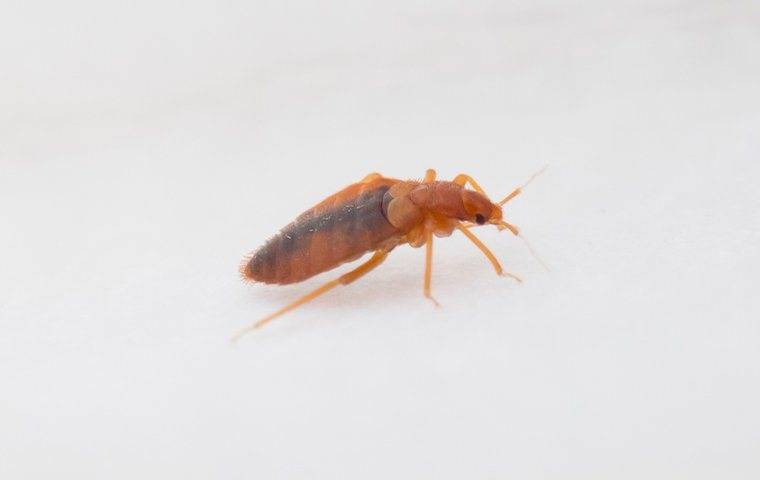 Three Bed Bug Facts Everyone Ought To Know

Despite their dreaded reputation, bed bugs are not known for spreading diseases; however, allergic reactions may occur, and heightened anxiety may result in sleepless nights in some cases. Other notable facts include:

Among the most common locations for encountering bed bugs include hotel rooms, trains, buses, and other sites frequented by travelers.

Why Are Bed Bugs So Hard To Treat?

Can pets carry bed bugs? Unlike fleas and ticks, bed bugs are much less likely to reside within the fur of pets. Rather, after feeding, these nocturnal creatures generally retreat to hiding spots where they remain until nightfall.  Because of this tendency, small bed bug intrusions may go unnoticed for weeks or months until they have substantially reproduced and expanded into a full infestation.

Keep in mind that the majority of home remedies, general bug sprays, and other novice pest control efforts have a minimal effect on these durable and elusive insects.

Bed Bug Prevention Tips You Should Be Utilizing Daily

Consider placing a specialized, impenetrable cover (encasement) on mattresses. A powerful vacuum cleaner can typically capture bed bugs and their eggs. Promptly wash and dry bedding materials and clothing if you suspect having encountered bed bugs.

Did you know that Freedom Pest Control deploys a team of professional technicians that have multiple treatment options at their disposal for eradicating bed bug infestations from properties in Portsmouth? Our experts respond promptly and perform an exhaustive inspection of the premises, which is critically important when determining the best treatment option(s). When needed, we can summon our Canine Scent Detection Team for deployment.

The first “traditional” method involves executing a series of three chemical treatments over several weeks that eliminates bed bugs from interior walls, baseboard areas, electrical outlets, and furniture. The next bed bug eradication method uses heat and is known as thermal remediation. We can now use this method in only one day and elevates the temperature to 135 degrees Fahrenheit.

In some cases, our specialists will choose a combination or hybrid model for eliminating these pests from your home. Regardless of the means, Freedom Pest Control strives for total customer satisfaction. Contact us today for a consultation.

Freedom Pest Control is reliable and employees are friendly and knowledgeable. I have been using this company for 3 years and will continue to do so.