Home › Blog › What To Do About Bats On Your Merrimac Property

What To Do About Bats On Your Merrimac Property

Bats have a rather bad reputation as they are known for spreading diseases, but they aren’t entirely bad. They do help regulate populations of mosquitoes and other insects as they can eat up to their body weight in small pests in just one night. However, this doesn’t mean they are safe to have around your Merrimac, Massachusetts property. 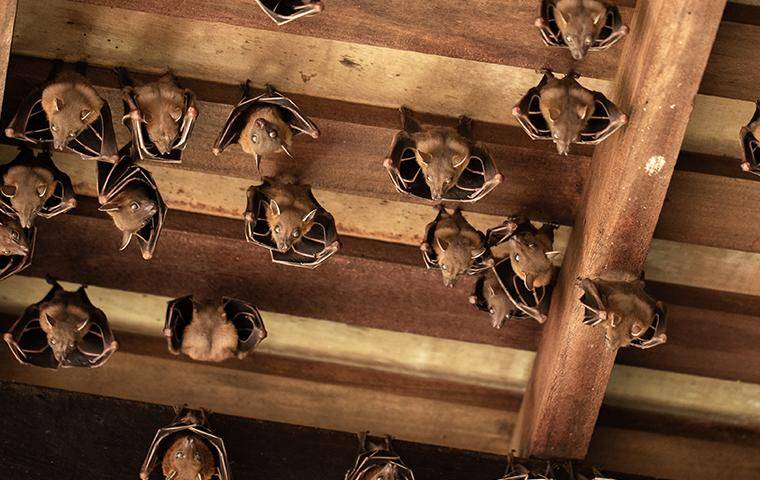 Bats pose health and safety risks, and they can be upsetting to encounter and difficult to remove. In this guide, you’ll learn everything you know about how to identify and deal with bats if they make their way onto your property.

To start with, it’s important to know what bats in the area look like. The most common bat species in Massachusetts is the big brown bat. They are often found in attics and rooflines of homes. They are about 5 inches long with sharp teeth, and broad noses. They have large eyes and rounded ears and range in color from light tan to chocolate brown with grey to black wings.

What Attracts Bats To A Property?

Bats are well-known for their ability to hang upside down while they sleep, so if bats come around your home or business, they will look for areas to dangle from.

The first places they usually go to are rooflines and eaves as they are easy for bats to access. If they can easily get inside, the second most common place bats are found is in attics. However, they will also invade sheds or garages that offer secluded, dark areas to hide.

The main reason bats are attracted to an area is because of access to food. They are nocturnal creatures that eat insects like flies, gnats, and mosquitoes, so underlying pest problems can draw them to your property. They can also be attracted to the scent of flowers and herbs as this often indicates prey is likely to be found.

Just How Dangerous Are Bats?

To start with, bats can produce a lot of droppings called guano. This fecal matter can build up on the side of buildings, on decks, or inside of attics and outbuildings. Over time, the guano can cause property damage and pose safety risks from slipping and falling.

However, the bigger concern with bats is that they can spread diseases. While it’s not all that common, bats can carry rabies, and if you’re bitten, you’ll need to see a doctor immediately. While not aggressive, bats can and do bite on occasion. They can also spread other diseases, and they may carry parasites such as fleas which can further transmit illnesses.

Finally, their droppings over time can be another health hazard. Guano can release an infectious spore when disturbed that carries histoplasmosis. This fungal infection is most likely to be spread if you have bats in your attic or another enclosed space.

If you have bats in or around your property, trying to deal with them on your own isn’t a good idea. This is when you’re at the highest risk of getting bitten, and bites are always a cause for concern. Bats can also be difficult to remove without training and the proper equipment.

So, instead, let the wildlife removal experts at Freedom Pest Control handle the problem. We offer reliable, effective bat removal options for property owners in the Merrimac area. Contact us today at (877) 737-8755 to request a visit and quote.