Home › Blog › Are You Having Issues With Flying Squirrels On Your Merrimac Property?

Are You Having Issues With Flying Squirrels On Your Merrimac Property?

When you imagine squirrels, you picture a small rodent nibbling away at a nut right before it darts off into a nearby tree. As pesky as these creatures are on land, you may be surprised to learn about a similar species that can take to the air.

Flying squirrels are often confused for other earth-bound creatures, such as tree squirrels and mice. One noticeable difference is their ability to appear as if they are flying. Continue reading to learn more about flying squirrels, the problems they cause, and how our Merrimac pest control experts can help with these critters. 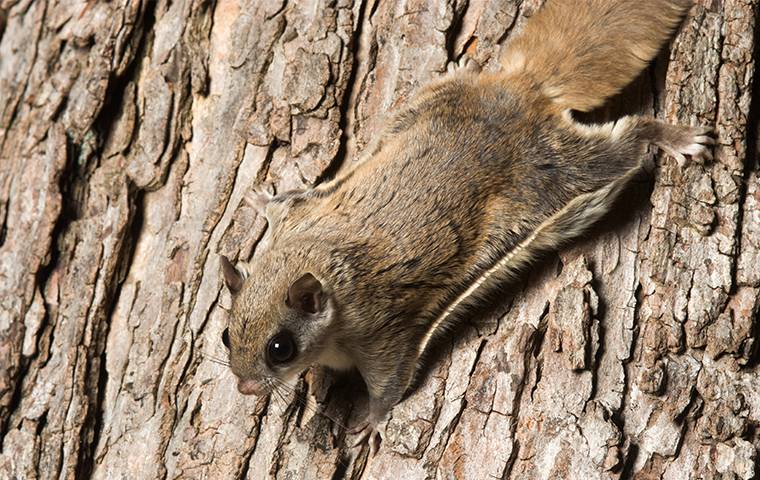 Flying squirrels in Merrimac share similar traits with their tree-dwelling cousins. Due to their small, round head, large eyes, and prominent ears, it’s easy to see these similarities at first glance. Once you take a closer look, you’ll find that flying squirrels have one unique feature that isn’t common to other types of squirrels.

Flying squirrels in Merrimac are capable of gliding 150 to 500 feet. They have a furry, parachute-like membrane – patagium – that extends between their wrists and ankles, giving them the appearance of flight. However, unlike most aviation species, flying squirrels don’t actually fly. The patagium acts as a hang glider, allowing the creature to glide rather than fly.

Even though they can’t propel themselves as a bird would, flying squirrels catch the wind by diving from a high branch. Flying squirrels turn their wrists and legs to change direction while using their tails to brake. With the help of a unique piece of cartilage, flying squirrels are able to turn 180 degrees to evade flying predators, such as owls.

Their fur colors vary for northern and southern regions. Northern flying squirrels are often reddish-brown in color, while their southern counterparts take on a more neutral gray coloring. The southern species is typically smaller than their northern counterparts, but neither grow larger than a foot and weigh two to five ounces.

The diet of flying squirrels consists of a variety of foods, such as seeds, nuts, fungi, fruit, and insects.

However, southern flying squirrels are said to be more carnivorous and supplement eggs, carrion, and birds into their diet.

The Problems Flying Squirrels Can Cause On Your Property

Flying squirrels feel most at home in large, dense forests. However, that won’t stop them from raiding a yard for shelter and food; flying squirrels will settle for any area with elevated nesting sites, including roofs and attics.

Since flying squirrels are incapable of propulsion, they behave like their ground counterparts and travel across power lines, chewing on the wires. However, the damage can worsen if they make their way inside your attic and gnaw through insulation, walls, and doors.

Knowing that these pesky creatures have the ability to disrupt your everyday life doesn’t make it any easier to handle them. However, flying squirrel control is not a feat you should tackle yourself. That’s where Freedom Pest Control comes to the rescue!

Since establishing our base in Merrimac, Massachusetts, in 1994, Freedom Pest Control has provided Massachusetts and New Hampshire with outstanding commercial and residential pest control solutions. Our mission is to provide excellent customer service using scientifically designed, environmentally sustainable, and innovative treatment methods. We deliver guaranteed pest and wildlife control in Merrimac with proven results. Give us a call today for your pesky pest problems!

Every technician we've had is so knowledgeable and polite. I love have the security of knowing we're taken care of by people we can trust in our home.