Beavers are a common type of rodent in Massachusetts that is best known for building dams that create ponds within streams and similar bodies of water. Beavers exist in wetland areas and may benefit the water quality by generating natural filtration that removes harmful chemicals and sediment.

Among the rodents that exist in North America, beavers are among the largest, with adults weighing from 35 to 80 pounds and reaching lengths of up to three feet.  Beavers have fur that appears in shades of red and brown and has webbed feet and wide tails that allow for navigating through the water. Beavers sometimes are misidentified with muskrats, which are much smaller rodents that reside near water.

Beavers may live for roughly 20 years, which is partly attributed to having a lack of predators. The same male and female beavers typically breed each winter, which results in up to nine offspring known as “kits.” Young beavers usually remain with their parents for two years.

As vegetarians, beavers primarily consume water lilies, leaves, and roots; however, they usually rely on tree bark for survival during the winter months. Wild beavers are among the few mammals that alter their environment by creating ponds within streams and smaller rivers.

Have beavers become a problem on your land? A Merrimac pest control professional that specializes in wildlife management will safely remove these pests from the premises. Providers of wildlife control services also understand the best ways of preventing further problems with these creatures. 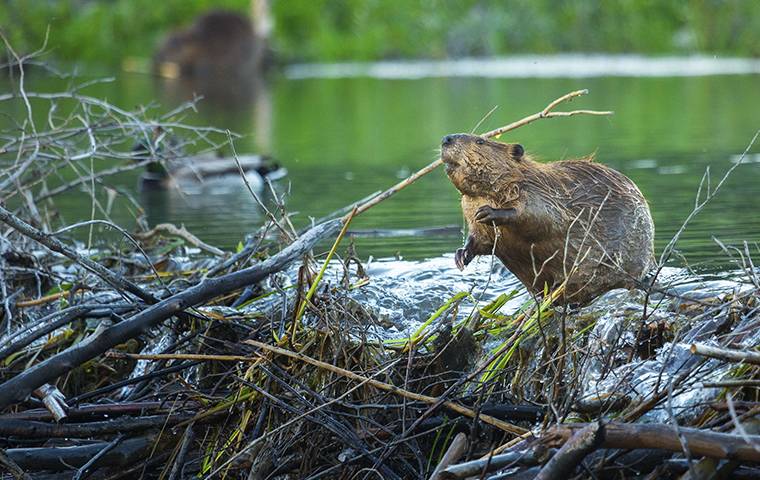 Plants, animals, and organisms that are invasive enter foreign habitats and often pose financial, environmental, or health risks. Beavers represent an invasive mammal that ventures into new environments and competes with native species. In extreme cases, beavers will significantly alter the natural ecosystem and adversely impact the food chain that sustains other creatures.

What Damage Can Unwanted Beavers Cause?

When beavers inhabit a new area, they usually modify the natural environment by creating dams that can form habitats for other creatures. Depending on the number of beavers and the water conditions, some of the following problems may result:

Although the arrival of beavers may have some environmental benefits, their alteration of the physical landscape often causes conflict. In some cases, the environmental harm is less apparent, as the dam-building creates problems to the natural environment much “further downstream.”

How To Control Beavers On Private Land

You can erect fencing “exclosures” that protect trees and shrubs, as beavers are poor climbers. Heavy-gauge fences extend from the ground to a minimum height of four feet. Massachusetts allows open trapping of beavers from November 1 to April 15.

Those who notice the presence of beavers on their property should contact a local pest control professional rather than trying do-it-yourself methods of removing these creatures.

Did you know that the experts with Freedom Pest Control have many years of experience handling wildlife-related concerns for Merrimac-area property owners, such as those involving skunks, raccoons, squirrels, and other potentially dangerous pests? Our technicians will determine the types of pest(s) involved and the extent of the problem, then choose the best available form of treatment.

Generally, our pest control professional will efficiently and humanely remove wildlife and identify any existing property conditions that pose risks for subsequent problems. Effective wildlife trapping requires a unique skill set and the proper equipment for safe nuisance wildlife removal in residential settings. Keep in mind that we stand behind the quality of our services with a customer satisfaction guarantee.

We look forward to hearing from you.